One of A Kind Family 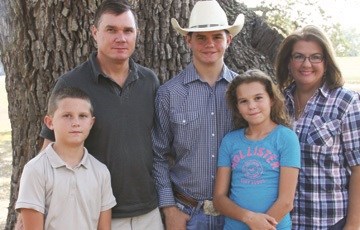 Brad arrived at Miracle Farm in August 2009 when he was just 13. Struggling with Attention Deficit Hyperactivity Disorder, other behavioral issues, and a general tendency to follow the crowd, his parents knew he needed a change of pace.

“We knew if Brad continued on the path he was on, there would be additional challenges,” said Cari, Brad’s mother. “We could have kept him in school and gotten him into counseling, but we decided to listen to our gut and to God. We knew there had to be a place for kids who walk to a different beat, and we found that at Miracle Farm.”

Before coming to Miracle Farm, Brad had only ridden a horse once or twice, but he quickly fell in love with roping. The calm he found with the horses and with country living proved to be just what he needed. He also quickly found the freedom to just be himself.

“The small number of kids at the Farm allows Brad to be a leader, where at home he found himself lost in the crowd,” said Darren, Brad’s father. “At Miracle Farm, Brad gets to be who he is and not who everyone thinks he should be. It’s just a safe place for Brad to be Brad.”

Of course, the staff at Miracle Farm attributes Brad’s success to more than just the structure offered by the program. Also important is the unique, one-of-a-kind support he receives from his close-knit family.

“In the nearly 15 years I’ve been around this ministry, Brad’s family has been one of the most engaged I’ve ever seen,” said Cindy Davis, formerly the Children At Heart Foundation Development Director supporting Miracle Farm. “The entire family volunteers for every available opportunity, and if there’s not one, they create one.”

In the two years that Brad has been at the Farm, his entire family, including his brother, Brian, 9, and sister, Brook, 11, have shown up to do work projects the week of the Farm’s annual open house each April. They have helped with campus clean-up, folded tee shirts, made signs, and happily done any other project needed. Darren’s parents also hosted the boys and staff for a deep sea fishing trip last summer, and Cari has recently devoted her time to putting together the annual Miracle Farm scrapbook.

“Much of Brad’s success can be attributed to his family’s commitment to partner in his progress, which is a great example for other boys’ families,” said Alex Hamilton, Executive Director. “They also welcome and encourage new families during our quarterly family training weekends, for which we are extremely grateful.”

From the angry, immature boy who first arrived at the Farm, Brad has transformed into a young man backed by quiet strength, wisdom and natural leadership. He takes spiritual disciplines very seriously, and is quick to rebuke when others do not. He is always listening and processing. He sticks up for the underdog when conflict arises among the other boys and is known as the peace maker among the group.

“Brad always has the wisest words for the other boys in their walk with the Lord. The Lord talks through him even when he’s not trying,” said Gayla Jones, Brad’s Miracle Farm house mother. “When the other boys are going through tough things and we’re counseling them, they don’t mind Brad being part of the conversation. There is a lot of wisdom behind Brad’s quietness.”

Brad recently passed on a deep sea fishing trip with the other boys when an opportunity arose to attend a rodeo Bible camp. It was at the camp that Brad experienced a spiritual turning point in his life and asked to be baptized.

“Brad’s spiritual life is deeply important to him. He reads and memorizes Scripture, knowing that the Bible represents God’s guidelines for life,” said Gayla.

David Jones, Brad’s Miracle Farm house father, says what sets the family apart is that “they’re all in,” which is allowing Brad the opportunity to be successful long-term.

“They never back off. They stay constant. They’re believers and prayer warriors, and are 100 percent involved in Brad’s life.”