A Change of Head and Heart: Lesson Learned 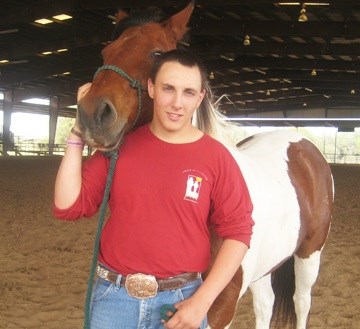 “Dalton was never a bad kid, but the public school system had failed him. He was struggling with his school work and getting his ADHD under control,” said Alex. “When I left TBCH, Dalton’s relationship with his house parents was not going great either and he was still having behavioral issues.”

Shortly after Alex transitioned to Miracle Farm, another young man from TBCH whose brother was a resident at the Farm told Dalton about the ministry. Dalton says he quickly decided that Miracle Farm might be a better fit for him and began pursuing the move.

Dalton arrived at the Farm in late April 2011. He was still struggling with his school work and was on several medications to treat his ADHD. Dalton continued having challenges in school and near the end of June announced he wanted to drop out.

Dalton was given a week to see what life would be like as a high school drop-out. One of the Farm's neighbors put him to work doing physical labor for two days. Dalton thought the work was boring, so he was then assigned to work with James Paben, who provides farrier services for the Farm’s horses. James had Dalton pulling weeds in the Farm’s cattle pens.

“We referred to it as the ‘James Paben drop-out program,’" said James. "After three or four days of hard labor, Dalton promptly decided he wanted to go back to school.”

“At first I thought Mr. James was just being mean to me to try and get me to go back to school, but then I realized this was the kind of job available for someone without an education,” said Dalton.

Upon returning to the classroom, Paben’s wife, Caty, who serves as Campus Director for Premier High School’s Miracle Farm campus and who is also Dalton’s teacher, made some modifications to Dalton’s school program. The change allowed him the opportunity to thrive academically.

“David and Dalton have a special bond because David understands Dalton; they’re very similar,” said Alex. “David has been instrumental in helping Dalton because he struggled with similar issues growing up.”

David has also taken Dalton under his wing and taught him how to take used ropes and craft head stalls and lead ropes for horses, which Dalton has had the opportunity to sell.

“Dalton is one of the most naturally gifted rope workers I’ve ever seen,” said David. “He is truly phenomenal with his hands.”

Dalton’s horse, Butkus, has also been instrumental in his change. Dalton volunteered to ride and train Butkus, who quickly earned a reputation for being a little bit feisty with some of the other boys.

"When Butkus arrived at the Farm he was a bit spoiled and did not want to be told what to do. Using a training method developed by master horseman Chris Cox, Dalton has been able to help Butkus understand that if he cooperates, life can be more fun,” Alex said.

"I can relate to Butkus, because people are telling me what to do all the time," Dalton said. "Now he actually lets me pull on his reigns and lead him."

“Watching these boys with their horses is like when hard heads meet hard heads. These boys are a lot like their horses. Neither wants to do anything and they both need to learn a lesson,” said James, who also volunteers with the Farm’s horse program. “As the boys start to get better, so do their horses. There are boys who return to the Farm long after they’ve left just to talk to their horses.”

Dalton hopes to leave the Farm and return home to Lexington to complete his senior year of high school.

“There are just a lot of people there that said I could never do anything without my medication and I’d love to prove them wrong,” said Dalton. “Plus, I’d like to share my story in order to motivate change in others.”

Now that Dalton is back on track with the help of the Miracle Farm staff, his teachers and volunteers such as James Paben -- and of course Butkus -- he also aspires to become either a mechanic or rope worker after he completes his education.

“Dalton represents the typical kid we serve here at Miracle Farm,” said Alex. “Just when you think a boy is ready to walk away, he steps up to the plate and becomes a man. Young men like Dalton are why we do what we do.”