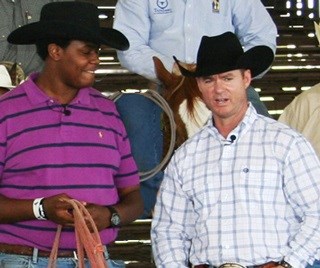 Renowned horseman and clinician Chris Cox and the crew of his weekly RFD TV series, Chris Cox Horsemanship, were on the Miracle Farm campus March 18-19 filming a two-part episode of the show.

Introduced to some of our boys and staff, Chris became intrigued with what he learned about the Farm’s use of horses and team roping as a therapeutic tool for young men attempting to overcome challenges in life. The ministry seemed to be a perfect fit for his television show, which endeavors to show horse enthusiasts a straight-forward, practical way to gain a better relationship with their horses.

Pictures of Chris At Miracle Farm

“When we first learned Chris had selected Miracle Farm as a feature story for his show, we were tremendously honored,” said Miracle Farm Executive Director Alex Hamilton. “What we could not have anticipated was the deep imprint that Chris, as well as his producer Keith Mundee and the film crew, left on our staff and boys while they were here. Their kindness and sincere interest in learning each boy’s story left an indelible impression."

“Chris’ arena skills are legendary, but to see him guide our young men to a greater understanding of their horses and themselves was incredible to watch," said Hamilton. "We are indebted to him and his crew for the time they spent with us and cannot wait to see how the television program unfolds.”