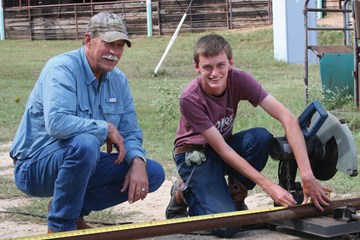 Every young man who comes to Miracle Farm has reached a crossroads. And the route he chooses can alter his life forever.

For 16-year-old Aaron, who had been having increasing challenges at school and at home, his journey began when his mom came across the Miracle Farm website. At first, Aaron was unsure.

“Then I read about the horses and that really interested me,” he said.

Aaron and his parents began the placement process five months before he actually arrived at the Farm last summer. With Miracle Farm filled to capacity for more than a year, they patiently waited for a spot to open up.

During that time, the family worked with Miracle Farm Clinical Director Robbie Fuller to set some at-home goals for Aaron, who systematically worked through each one of them despite his initial misgivings.

“It frustrated me at first because everything they were asking me to do were things I knew I should have been doing to begin with, but wasn’t,” Aaron admitted.

His efforts impressed both his parents and Robbie and didn’t stop after he made it to Miracle Farm. In the months he’s been at the ranch, he’s hit every mark with the same diligence.

His relationship with his mom and stepdad is steadily improving and they’re talking a lot more, he said. He’s also doing much better in school.

“School has been a lot better here because it’s self-paced and easier for me to focus,” explained Aaron. “I can get through my work a lot faster because I’m not talking to everyone in class like I used to do.”

He loves working with his horse, Homer, but says he enjoys taking care of him more than the actual riding.

“I like the horses better when I’m on the ground, but that could be because I’m still getting used to riding and Homer is pretty bouncy. It may change when there’s not so much air between me and the saddle,” he said, grinning.

Not surprising is Aaron’s love of the Farm’s afternoon work projects. He’s especially interested in learning to weld, something he hopes to make his career.

“I never used to do much work at home, so I’m actually learning how to work now,” he said.

His favorite work partner is his house dad, “Mr. Jerry” (Henderson), and the feeling is mutual.

“Aaron has a servant’s heart by nature. He’s very perceptive, more so than most, and extremely teachable. The thing that has struck me most about this young man in the few months he’s been with us is his initiative. He is willing to jump in and try anything,” Jerry said.

Aaron came to Miracle Farm enthusiastically and willingly, by his own choice. That is a trend that is becoming more common.

“Exploring an out-of-home placement for your child can be an agonizing choice for a parent,” said Fuller. “When they make that first call to Miracle Farm, they’ve typically exhausted every avenue they know of to help their son at home.”

It wasn’t too long ago that most boys arrived at the Farm reluctantly and with an understanding from their parents that they didn’t have a choice.

“The last several boys we’ve admitted have asked to come to the Farm, and agreed to begin completing goals while still at home,” said Fuller. “They want to be here.”

Though the rest of Aaron’s Miracle Farm story is yet to be written, he’s off to a great start. We pray that in the final reading, his choice of the road less traveled will have made all the difference.