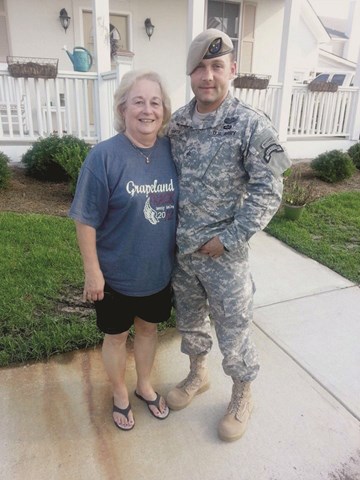 A Miracle Farm alum, Army Sgt. Darrell Smith is living the dream. A Team Leader in the U.S. Army’s 75th Ranger Regiment based at Hunter Army Airfield in Georgia, he spends his days chasing adventure in a way that might seem enviable to some.

As one of the “quiet professionals” of the military, though, training for dangerous raids and assault missions can be grueling.

His responsibility for his unit’s preparation for combat weighs heavily on the 28-year-old.

“I have to make sure I’m ready, that my guys are ready, and that the equipment’s ready,” he said.

“I look at some of the kids coming in now, and I wonder if they’re going to be able to handle some of the things we’ve seen in combat. It is my job to make them understand what it means to work hard and to be mentally tough,” he explained.

“I spend a lot of time just coaching them on being a man and accepting responsibility for the things they do.”

Having spent 27 months overseas during three different deployments since enlisting in 2006, Darrell has a deep understanding of discipline and hard work. He credits this to his 22 months at Miracle Farm.

“The intervention I had – and I didn’t see it at the time – pointed me in the direction I needed to go,” he said. “All the guys come to Miracle Farm with baggage, and I was no different. I blamed my behavior on everyone else.

“They give you all the tools, and then when life is right in front of you, you either take those tools and use them or you don’t. It’s your choice.”

Darrell admits to a few lost years after high school when he skated through some dead end jobs and walked on the wild side of some pretty dark roads. The turning point came when he circled back to the Farm for a visit and spent a day with a former staff member, Tim Webb.

“Mr. Tim had this way of seeing right through me. He looked me dead in the eye and said ‘whatever you’re doing, you need to change.’ It crushed me because I knew that if Mr. Tim said it, it was true,” he shared.

Those words yanked him back to his days at the Farm, when he learned how to be a man after God’s own heart. Darrell knew deep down that his life was meant for better things. A year later, he enlisted.

His mom, Darrelyn, could not be more proud of how far her son has come, saying that Miracle Farm “brought his heart back to where it needed to be.” She credits his house parents, Joe and Cheri Baker, with teaching him how a husband and wife should respect one another, something that comes in handy these days.

Married for two years to wife Jennifer, Darrell’s role as a husband and father means more to him than anything else. And as exciting as his day job might be, most of his conversation is wrapped around home. He says the high-risk work he does can be tough on a lot of marriages, so he’s especially grateful to have his family as an anchor.

He adores Jennifer, calling her his greatest encourager, and places high value on her steady partnership in building a Christian foundation for their family.

He’s also deeply committed to his role as dad to Ryan, his three-year-old son from a previous marriage, and to Jennifer’s nine-year-old son Luke. The family attends church together as often as his schedule allows and they have built some great friendships there.

His Miracle Farm house mom, Cheri Baker, is humbled by what God has done in Darrell’s life.

“There were a few years when Darrell was making choices that made me very afraid for him,” she admitted. “These days, he’ll touch base to check in and more often than not, will end up encouraging me instead of the other way around. He truly has become the man we always knew he could be.”