Raising Up a Father 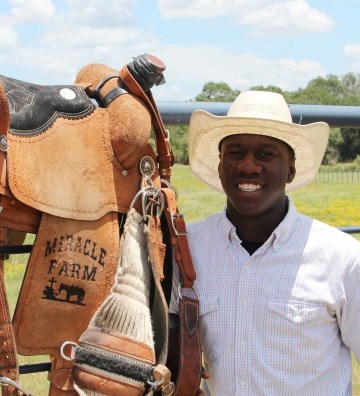 When Rickey was 12 years old, his mother had a stroke which left her with damage to both her physical and mental health. Unable to fully recover, this event had a dramatic impact on many of her relationships, particularly the relationship that she shared with her son.

“That experience sent my life spiraling. It was hard not having her around and acting the same,” Rickey vividly remembers. He’d never had a relationship with his biological father, so he had no one else to turn to when things got rough at home. The instability of their relationship led to frustration and screaming matches, one of which ended with a visit from the local police.

When Rickey’s youth pastor was informed about the incident, he knew he had to intervene. After being invited by a friend, Rickey had been attending church and become a regular part of their community. “I kept going [to church] because it was different from the neighborhood I grew up in,” he remembers. “It got me away from being at home.” His regular attendance created a special bond with his youth pastor and his family, so when they heard about the incident, they invited him to come stay at their house.

It was a calm and healthy environment, but he didn’t know how to live with a family. He wrestled with the structure and discipline and really struggled to adjust to their dynamic. Ultimately, they realized that he needed to heal from the trauma of his past and learn what healthy, trusting relationships looked like. Rickey found what he needed at Miracle Farm.

He arrived at Miracle Farm when he was 15 years old and, though he did not know what to expect, he was determined to stick with it. As an only child, he was not used to living with other kids … much less a house full of other Miracle Farm boys. He had a rocky start, but through the mentorship of his house parents, a solid foundation was laid for his development. Recognizing how deeply Rickey was struggling to adapt, James Paben took a keen interest in him and intentionally invested time into building a trusting relationship with him. In turn, Rickey came to admire James’ work ethic and began to learn from the consistent, loving example that James set for others. Once impatient and short-tempered, Rickey began to work alongside the other boys on the Farm as opposed to working against them in chores and daily tasks.

Believe it or not, he also learned how to respect women at Miracle Farm. “When we first talked about girls in the house, I would just call them chicks,” he admits. “But being around my house mom, Mrs. Renda, showed me that women and motherhood are important.” Chris and Renda Welch loved and cared for the boys in their cottage in a way that many of them had never experienced. “It changed the way I thought about women,” he says. Mrs. Renda taught him how to cook and how to clean, but she also taught him what a healthy, trusting relationship with a mother figure looked like. Through her example, he learned to respect women and value their roles.

Rickey really began to thrive in the structure that Miracle Farm offered. He learned the value of setting goals and working hard to achieve them, which actually led to him graduating from high school one year early! From that point, he moved into the Independent Living program and experienced what it looked and felt like to be on your own, but with the support of Miracle Farm staff only a few yards away. Knowing that he needed to be disciplined in creating structure and a schedule for himself, he often turned to James Paben to help him implement those things and to hold him accountable.

Now 24 years old, Rickey is working as a lineman for an electric company and is on track to achieve his goal of becoming one of the youngest electrical foremen in his company. He has experienced great success and stability in his career, which he attributes to his role models at Miracle Farm.

He became a father 5 years ago and has an adorable little boy named Aiden. He loves getting to be Aiden’s dad and works hard to have a loving, healthy bond with him, even at a young age. “By watching men like James, Chris, and Alex, I learned how to parent my son. To see how these men are with their own children and how supportive they are of them, it made me want to be like them,” Rickey says. “It doesn’t mean making sure I’m my son’s best friend or that he will always like me, but now I know how to be a hard worker and provider for him.”

Because of the hope and healing that Rickey experienced at Miracle Farm, Aiden will grow up knowing the love of a caring father and the stability of a healthy home. “Miracle Farm gave me a second chance,” he explains. “It was a chance to change my life … and the life of my son.”