From Farm to Family 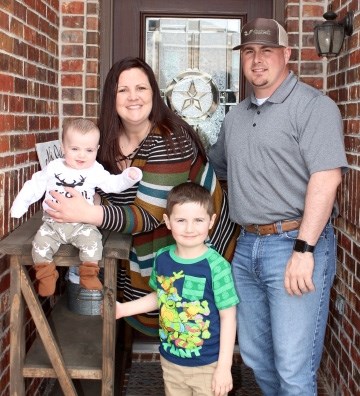 In the midst of a normal Saturday morning, Sean searches the living room for a burp rag to hand to his wife who is cradling Colt, their five-month old son. Meanwhile, sounds of laughter from five-year-old Jace can be heard in a nearby room as he watches cartoons. Once the family finishes their morning routine, Sean heads to the hardware store to do “dad things.” You could assume that fatherhood appears to come very naturally to Sean but – at 32 years old – Sean has never met his real father. Instead, he was raised by a community that was willing to step in when his birth parents stepped out.

Without his father in their lives, Sean’s mother was overwhelmed by the task of being a single parent. She knew it was more than she could handle and she feared making life choices that would be detrimental to her young child. Feeling like she had no other option, she left Sean with his grandparents, who legally adopted him at the age of five. They became his parents and provided him with the stability and support that he’d never known before.

“My mom wised up and realized she couldn’t take care of me when we were living out of a car,” Sean recalls. “I experienced a lot of neglect at an early age, but when my grandparents adopted me, I was able to just be a kid.”

However, as Sean entered into the rebellious teenage years, he clashed drastically with his parents which created lots of family tension. “I knew I wasn’t a terrible kid,” Sean explains, “but things just weren’t going well at home.” The generational differences between Sean and his parents added to their already strained relationship. These factors manifested themselves negatively in Sean’s work at school and his attitude at home.

His parents knew that Sean needed more discipline and structure than they could offer, so they began researching military schools that would be a good fit for him. But when they came across Miracle Farm, they knew it was an answer to their prayers.

Sean arrived at Miracle Farm in 2000, during his freshman year of high school. He had always enjoyed the outdoors, which made the Farm seem like a great fit for him. But living an hour and a half away from friends and family felt like punishment. “When I first came to Miracle Farm, it was very rough but my house parents, Dean and Debbie Forland, helped make the transition awesome.”

The toughest part for Sean was not the new environment or household chores. Rather, it was the things that came to light during his counseling sessions. He was surprised to discover that, deep down, he carried a lot of resentment and anger toward his biological mother. “Until that point, no one in my life knew the way I felt toward my biological mom. I believed that she didn’t want me and didn’t love me and it was taboo for me to talk about,” Sean says. “I think it was good that it was something addressed very early in my stay at Miracle Farm.”

As hard as it was to talk about these difficult things, it helped Sean begin to heal from the deep wounds he had carried for most of his childhood. At Miracle Farm, he knew he was in a safe place, surrounded by people who truly loved him and believed in him. His house parents were such a great source of encouragement and they wanted nothing more than to see Sean live up to his God-given potential.

During family visits at Miracle Farm, his parents witnessed the positive progress Sean was making. After successfully completing his second year in the program, Sean returned home to his family. But this time, it was different. He was different.

Now he was equipped with a new sense of security, acceptance, and significance that came from an identity in Christ – and this changed everything. When conflicts arose at home, he was able to react with patience and respect, something that had been missing just two short years earlier. From that point on, Sean’s life has never been the same.

After graduating from high school, Sean knew he wanted to serve his country, so he joined the Army Reserve. He credits his success as a Platoon Sergeant to the routine, structure, and self-discipline that he learned at Miracle Farm. “In the Army Reserve, I have 53 people from all backgrounds who are under my supervision,” he says. “For some, I see my past self in them and because I was once in their shoes and I know how to create relationships with them on a more personal level.”

Sean met the love of his life, Megan, and they married in 2010. Their first son, Jace, arrived in 2012 and their second son, Colt, in 2017. “So much of who I am as a husband and father is a result of my experience at the Farm. I’m so thankful for my time there and what that has meant for my own family!”