Home is Where the Farm Is 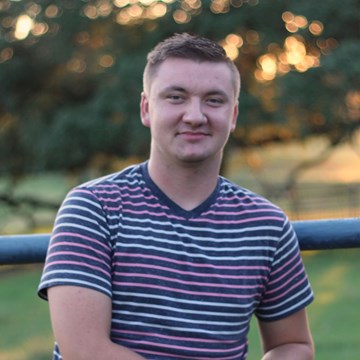 On the evening of his high school graduation, Cody knew that when he walked across the stage to receive his diploma that he would not see his parent’s faces when he looked out into the crowd. Instead, he would see the faces of those who impacted him the most at Miracle Farm – the ones he grew to trust and the ones he would call family.

As a young child, Cody endured extreme physical abuse and neglect at the hand of his biological parents, often being locked in a bedroom without food, water, or access to a bathroom. For years, Cody and his younger brother were strangers to the outside world. Boarded up windows and dead-bolted doors kept the two of them captive as they clung to one another for survival.

“At a young age, I was my brother’s caretaker,” Cody vividly remembers. “We would go days without being fed and it was up to me to find a way to make the food last.”

Cody was a prisoner in his own home until family friends came to visit. When they heard the heartbreaking sound of children’s cries echoing in the hallways, they knew they needed to go to the police. After Cody and his brother were rescued, they spent the next few years rotating in and out of foster care homes. Cody and his brother, along with their new baby sister, were adopted into the same family in 2005.

“Life was happy-go-lucky for the first three years in our adoptive home. Then everything went downhill. When I’d do something wrong, I’d get spanked … which only reminded me of my past,” Cody recalls.

Cody was thankful for his new home and new parents, but it didn’t take long until the reminder of feeling unwanted crept back into his life. It seemed that every time the family faced difficulties, Cody carried the burden of blame.

His adoptive parents learned about Miracle Farm from a friend and sent Cody to live there in 2011. While he didn’t understand why he was being sent away, Cody was okay with the temporary reprieve from a stressful situation at home and knew the Farm would allow occasional home visits.

A few months into Cody’s stay at Miracle Farm, he had a chance to go back home to visit his family for a weekend. A few days after he returned to the Farm, the staff delivered the devastating news that his adoptive parents had made it clear that they wanted to cut ties with him completely – they didn’t want to have anything to do with him. At the age of 12, Cody was abandoned by his family, without any explanation or goodbye.

“It set in really hard. After all the foster homes and the parents that I had gone through, it made me feel like I wasn’t worth it. And that is when I went downhill really fast at the Farm.”

Feeling lost and insignificant, Cody battled against the authority of his house parents, Mr. Dave and Mrs. Gayla. They told him they loved him and cared about him, but that truth was hard for Cody to believe when the people who had called themselves his family abandoned him. “Mr. Dave told me there was nothing to be scared of and that we were going to be family,” Cody remembers. “But that just reminded me of all the family I had before and what they’d done.”

Cody also struggled to build friendships with the other boys at Miracle Farm. In his lack of maturity, he often overcompensated for the childhood he never had. Cody was used to being the one others relied on and, now that he was no longer the oldest, he wasn’t sure how to behave. As the guys around Cody modeled a big brother relationship with him, they helped him learn to let his guard down. They helped him learn to trust others and grow into a young man of honor and integrity.

The relationship Cody had with his house parents also changed drastically as he began to grow and mature. The Lord changed his heart to see his Mr. David and Mrs. Gayla as wise and trustworthy, portraying the characteristics of godly parents … something Cody had never experienced before.

“They had been there from the very beginning. They have filled the role of my mom and dad in my life. Mr. Dave has shown me how to be a man, and they have shown me what parents are supposed to look like. It is nice to finally have people I can talk to and who I know are there for me.”

After years of hard work and dedication, Cody graduated from the charter school at Miracle Farm in September 2017. As he walked across the stage that day, he looked out in the audience to see the proud, beaming faces of his house parents, the Miracle Farm boys and staff, and countless others who have become his family. In that moment, Cody knew that he was loved and significant … not only to these people, but also to a God who knows him and cares for his every need.