A New Way of Life 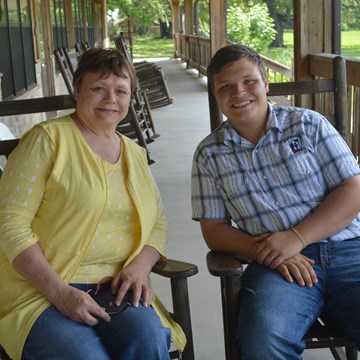 Jason Callahan and his mom, Mylynda, can trace his struggles with school all the way back to the second grade, when he started being bullied by his classmates. Under the advisement of the school, he was treated with medication for ADHD and depression. “I remember feeling like Jason was a pretty well-adjusted, happy child … until that point,” his mother recalls.

Things really hit rock bottom when Jason entered the seventh grade. Knowing something had to change, Jason’s mom took him out of school and tried homeschooling for six months. When that didn’t work, they moved to a smaller town to try to escape the bullying. But, after only a couple of months in the new school district, the old struggles emerged. At that point, Jason just stopped going to school altogether. “I would delete voicemails off my mom’s phone from the school so she wouldn’t know I skipped,” he says.

Around that time, a family friend referred them to Miracle Farm. In January 2014, Jason came to live at the Farm. Shortly after, his mom moved to College Station so that she could be close to Jason and stay involved in his life on a regular basis.

After experiencing the structure and stability of life on the Farm, Jason realized how deeply he had been impacted by not having a father figure in his life. While his dad left the family when Jason was only five, it wasn’t until adolescence that Jason recognized the trust issues that often consumed him. “In my mind, I just couldn’t better myself without having that foundation I so desperately wanted,” he explains. Healing from the loss of his father came in the form of a close bond with his house dad, Tony. “He just seems to understand the struggles I face without having a dad and offers a lot of grace.”

Like all the other boys at Miracle Farm, Jason was given the responsibility of caring for his horse, which was a new skill that helped him build confidence. “I learned to trust my horse,” Jason explains. “Trusting is something I hadn’t been able to do since my dad left.”

After a year and a half at Miracle Farm, Jason chose to become a follower of Jesus. “I think in many ways I expected that decision to be a fix all for all my problems and I became frustrated when I continued to struggle. But I knew how far I’d come, and I knew that there was nothing good waiting for me if I gave up.”

“They’re teaching these boys an important lesson out here,” his mom says. “It’s okay to fail, as long as you get up and keep going.”

As Jason has grown and become a leader, he has been able to encourage many of the other young boys along the way. “I always say that change doesn’t happen with a snap of your fingers. You have to put in the work. I tell the other guys that if they’re here just to get away from their families, then they’re just wasting a bed. We should all be here to better ourselves.”

His mom, Mylynda, has also been instrumental in encouraging the other families at Miracle Farm both in her example in parenting Jason and in the wisdom she offers. “She speaks truth to the other parents in ways we just can’t because we haven’t walked in their shoes,” says Amy, Jason’s house mom.

Since coming to Miracle Farm, Jason has caught up on his school work and is scheduled to graduate on time in May 2018. He has learned to weld, rope, and ride … and as a result, Jason has become confident in his ability to master new skills.

Miracle Farm has helped give Jason a reason to dream, plan, and look toward the future. After graduation, Jason hopes to attend Texas A&M University to study mechanical engineering.

“Miracle Farm works really hard to not only teach these boys a new way of doing things, but to also teach us a new way of parenting,” says Mylynda. “I am so thankful for the way they are showing my son what it means to be a godly man.”