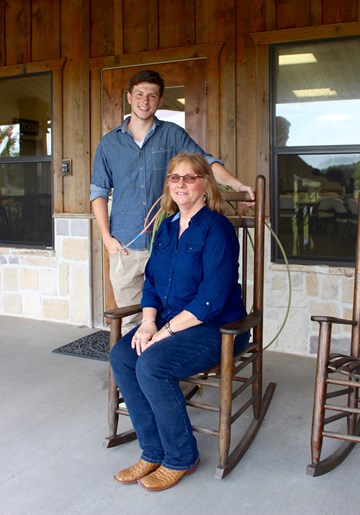 From the solitude of his bedroom, Travis could hear the sound of his mother crying down the hall. He knew he should get up and go to school, but when she woke him that morning, he had refused to get out of bed. He just didn’t care anymore. Travis had lost motivation to attend school and it was putting a strain on his relationship with his mom. Overwhelmed with disappointment, she felt like there wasn’t any hope for her son. But what she didn’t know was that the chance of a lifetime was waiting for him at Miracle Farm.

Travis’ father passed away when he was five years old, leaving a great void in his life. Even though his mom, Karen, loved him and his two older sisters well, Travis often felt outnumbered and insignificant in a predominantly female household. This family dynamic led to a lot of miscommunication and conflict between Travis and his mother.

In elementary school, he began struggling with his daily school work and was given medication to help with his concentration and discipline. As each school year passed, the medication increased. “The medication helped me a lot in school, but it would eventually start to affect my health, my attitude, and lead me to develop some anger issues,” Travis recalls.

By his first year of high school, the same problems were still looming but they had grown into something bigger: Travis just started skipping school altogether. It was a daily battle for his mom to get him out of bed in the morning – a battle she often lost. As a single parent, she felt defeated and often gave in to Travis’ stubbornness. But Karen wasn’t the only one mourning her husband’s absence. As a teenager, the death of his father was affecting Travis more than he realized and it had begun to take an emotional toll.

“I had been a Christian since I was very young, but during this time in my life, I found myself very angry with God because of everything that had happened. I wouldn’t even wake up to go to school, much less wake up to attend church.”

Karen knew that they both needed a change. After hearing about Miracle Farm from a friend, she believed that sending Travis to the Farm would be the best for both him and the family.

Eager for a change of pace, Travis willingly left the comfort of his home and school and moved to Miracle Farm. The self-paced charter school was a great motivator for him and he thought that the faster he could catch up on his school work, the faster he could return back home. But once he arrived at the Farm, a greater change started taking place. Being in a house full of boys his own age and having a father figure in Chris Welch, his house dad, provided Travis with the setting he needed to mature as a young man and learn responsibility.

Though every day had its challenges, the consistency of a structured environment helped encourage Travis to complete his daily chores and school work. He really enjoyed the responsibilities he was given at Miracle Farm. He gained self-confidence through the close friendships he developed with the other boys who soon felt like brothers to him.

All of Travis’ hard work paid off! After successfully catching up with his peers, Travis graduated from high school at Miracle Farm in 2012. Thanks to the strong educational foundation he built, he was able to attend Texas Tech University in Lubbock, where his discipline and effort afforded him great scholarship opportunities. He graduated from college in May of 2016, with his mom, sisters, and Miracle Farm family cheering him on.

Thanks to several faithful educational endowment donors, the Children At Heart Foundation provided eight semesters of financial aid to assist Travis with his college education.

Both his mom and his house parents are incredibly proud of all he has accomplished. “Travis took advantage of all the resources he was given at Miracle Farm. He is a testament to what you can achieve at the Farm if you put forth the hard work,” Chris proudly boasts.

Because of his time at Miracle Farm, Travis experienced healing and restoration in his relationship with his mother, whom he now treasures deeply. He always knew he had a great family – he just needed the guidance of a healthy male role model to help him grow into a responsible, respectable young man who cares for his family well. “Miracle Farm was a miracle for our family,” says his mom, Karen. “We are so proud of Travis and who he is becoming.”