The Path to Grace 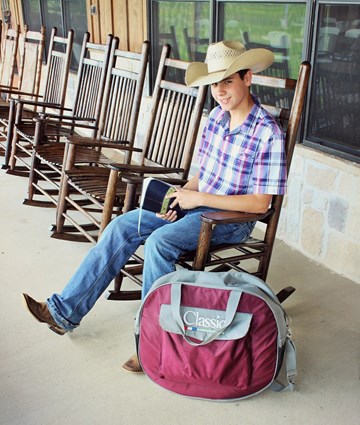 Cody stands at the head of the cafeteria while lunch tables filled with boys anxiously await his command to come forward, get in line, and eat. This is another leadership role that Cody has earned since arriving at Miracle Farm. But he didn’t always know that he was called to be a leader. In fact, there was a time when he wasn't so sure that God even had a plan for his life.

Growing up in a broken home left Cody feeling lonely and neglected, which quickly turned into rebellion and anger. Raised in a single-mother household, Cody was tormented by the pains of abuse and neglect. For years he was forced to endure that environment until he was sent to live with his grandparents at a young age.

“When I first went to live with my grandparents, I was so relieved. Finally, my sister and I had been rescued. But after a while, she went back to my mom’s house and I was left with my grandparents,” Cody remembers. “When I realized that my mother wanted my sister back and not me, I thought it was because God was mad at me. And I was mad at Him, so I threw Him out of my life.”

While living with his grandparents, Cody lashed out at his peers in school and even became disrespectful to his grandparents. It was then that they decided that it would be best to send Cody to Miracle Farm. “When I first watched the video, the only thing I was looking at was the horse riding part,” Cody says. “But when I got here, it took a while to realize there was more. It was an opportunity to change my life."

Cody arrived at Miracle Farm in September of 2012 when he was 13 years old. Despite the change of environment, Cody remained the same on the inside – wounded and broken. For the first year and a half of his stay on the Farm, he struggled with depression and even thoughts of suicide.

"I was hurting myself, and I felt like I didn't belong anywhere in life. I felt like everything was my fault."

The staff at Miracle Farm received pushback from Cody when they tried to help him transition into living life on the farm. He remained quiet and closed off, but through counseling and Bible studies, Cody slowly began to peel back the layers of hurt and distrust just enough to allow some of the staff members into his world.

In 2013, Cody attended Rodeo Bible Camp in Oklahoma with other boys from Miracle Farm. The pastor who was leading the event said something to Cody that he will never forget. "Even though there are really hard times in life right now, God will always be with you,” he said. “He is never mad; it's just another difficult step. But He is always with you." Cody knew that was God’s way of talking to him, so he began to release his grip on the lie that this pain and neglect was his fault. He traveled back to the Farm changed by the freedom he found in God’s grace.

When Cody returned, he became more committed to his time in Bible study and let the excitement of his new-found salvation in Christ fuel his compassion and servanthood toward others. That is when he decided that he was going to use his story as a way to encourage the other boys at Miracle Farm.

“I had to learn that even when we don’t like the things that God does for us and we think it might be because we did something wrong, God has a plan for us and we just have to follow the path,” Cody confidently declares.

Cody not only encourages the other boys by sharing his story, but he challenges them to immerse themselves in Scripture daily so that they can together be “warriors in Christ.” The first verse that Cody ever memorized when he arrived at Miracle Farm is one that was told to him by his counselor. He has it imprinted on a tag that he keeps on his rope bag as a constant reminder that he doesn’t have to walk this path alone.

“Cast all your anxiety on him because he cares for you.” 1 Peter 5:7

In April of 2015, Cody received the privilege of being the flag carrier at Miracle Farm’s annual event, A Day At Miracle Farm. This honor is given each year to a boy who has displayed great character and growth. Cody was awarded this distinction after being nominated by the staff. Carrying the flag has been more than an honor for Cody; it also symbolizes another big step in his walk with Christ. It serves as a reminder of how far he has come, and that God is carefully leading his path.

At 16 years old, Cody has already learned lifelong lessons about faith and servant leadership. He plans to graduate high school from Miracle Farm so that he can attend college and major in equine studies with hopes of being on a collegiate roping team. But most importantly, he wants to continue to share his story so that others can experience freedom too.