The Road to New Life 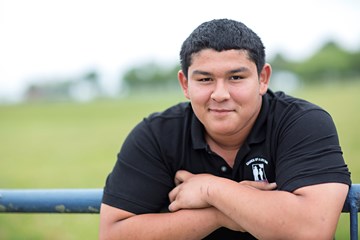 For most of his childhood, Alexis was raised in a single-parent household. His father left when he was 8 years old, which is about the same time that Alexis began to really struggle with anger. “Life in my family was stressful. I was told that my dad never wanted me, and the hurt from that built up inside me. I couldn’t figure out what I did wrong. For me, my anger was a product of him leaving.”

The youngest of four children, Alexis got along well with his brothers, but he had a strained relationship with his mother. The absence of his father left Alexis wrestling with deep-seated feelings of frustration and rejection. He discovered a passion for creating and fixing things – such as electronics and woodworking – but in his teenage years, his curiosity led him down a different, more harmful road.

When he was 15 years old, Alexis started using alcohol and drugs. His reputation as a troublemaker led him to get involved with the wrong group of friends. In an attempt to escape the feeling of anger he kept buried deep inside, Alexis tried almost any drug he was offered. Since the high from drugs never fully satisfied him, he continued to experiment with different ones until he was arrested for drug possession at 16.

In addition to his arrest, Alexis began skipping school. His absences, coupled with a careless attitude, resulted in failing his classes. Thankfully, his sister-in-law suggested that he seek help at Miracle Farm. Alexis willingly moved to Miracle Farm to escape his troublesome lifestyle and difficulties at home.

It took some time, but as Alexis began to experience discipline and community on the Farm, he started to realize that his life needed to change. “I wanted to change the road I was going down because, if I kept going the same way, I probably would have ended up broke and homeless. So I chose to do something about it,” Alexis recalls.

It soon became clear to Alexis that he couldn’t do this all on his own. So, naturally, he turned to his house parents for guidance and support. They have been helping Alexis identify his areas of struggle and grow stronger to overcome them. The open communication that Alexis has with his house parents is unlike any relationship he has ever experienced. He feels like he can be vulnerable and honest with them. Through the nurturing of this relationship, he has been able to break down the walls of anger and feel a genuine sense of love and gratitude for the first time in a long time.

Not only has Alexis found guidance through the relationship with his house parents, but he also found guidance through his new relationship with the Lord. In September 2015, Alexis came to know Jesus as his Savior. Learning about the forgiveness found in Christ prompted his heart to change as he was moved to rid himself of the anger he found his identity in for many years.

The forgiveness that Alexis felt has impacted the way he treats others. Instead of being quick to anger, he tries to display patience and forgiveness. He is learning how to be a godly young man of character and discipline who shows grace to his peers.

Living at Miracle Farm is helping Alexis rediscover his creative talents. He is currently working toward a welding certification, which he plans to pursue as a career after graduation. He feels prepared for his new life, thanks to the support from his family at Miracle Farm and the encouragement he finds in one of his favorite verses: