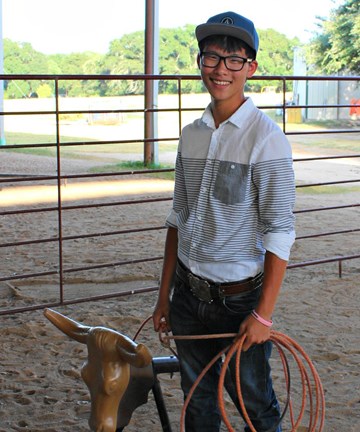 Wontaek moved to the United States from South Korea in 2010. Life in Korea was challenging because he didn’t have a close relationship with his family, so he spent a lot of time at school or hanging out with friends. Unfortunately, those friendships introduced him to the bad habits of lying and stealing.

When his mom noticed the difference in his behavior, she was concerned and suggested that he visit his aunt and uncle in America. They made arrangements for him to stay temporarily with his family in Austin, where they hoped he would find reprieve from negative influences.

Wontaek describes himself as living in a dream world when he was in Korea. It wasn’t until he was disciplined by his aunt and uncle that he realized how deeply rooted those bad behaviors had become in his life.

“People say a needle thief becomes a cow thief. A bad habit that started off small just kept getting bigger and bigger in my life,” he says. After arriving in America, Wontaek found the challenges of learning a new language and adapting to a new culture to be overwhelming.

Instead of helping him, a new start in America only helped fuel Wontaek’s negative tendencies. His aunt and uncle decided to extend his time in America, but after a few years they realized he needed more support than they could offer. They reached out to Miracle Farm for help. Seeing the disappointment on the faces of his family members, Wontaek knew he needed to change.

“I was so scared. If I didn’t get accepted into Miracle Farm I would have to go back to South Korea,” Wontaek says. “For me, it was a chance of a lifetime to change who I was.”

In December of 2014, Wontaek arrived at Miracle Farm. Adapting to life on the Farm was hard, but this time he wasn’t able to hide behind his bad habits. “The more I got used to being here, the more I saw that we are all the same boys, we just have different problems.”

Wontaek immediately got involved in team roping and, for the first time in his life, he set a goal for himself. The Farm uses a leadership ranking system that allows boys to begin as Ranch Hands and work their way up to the top level of Ropers. Wontaek aimed to go from Ranch Hand to Roper in 4 months… something that had never been done before. And with the help of his counselor, he did it!

“The Farm is really changing me. Sometimes I find myself still wanting to do bad things, but I have been taught how to handle those situations differently.”

The way Wontaek has overcome so many challenges in such a short time has made his house parents really proud. He is pursuing his goal to be a bull rider in college but, most importantly, he’s pursing his faith in Jesus. Wontaek knew when he arrived at Miracle Farm that he wanted to clear out his old life and pursue something new. He is now challenging himself to pursue the kingdom of God.

“But seek first his kingdom and his righteousness, and all these things will be given to you as well.” Matthew 6:33